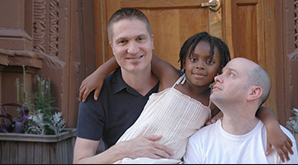 In A Family Is a Family Is a Family, kids offer touching, profound and often funny insights about what being a family means to them. Among those featured are: children with two fathers or two mothers; a girl whose mother and father adopted her in China; three brothers who live with their mother and grandmother; a pair of mothers who are getting married to make one big family; and families with adopted kids and children born through in-vitro fertilization.

In the special, Rosie O’Donnell talks with her daughter Vivienne Rose about how their family – which includes sister Chelsea, brothers Parker and Blake and parents Rosie and Kelli – came about. Following her recent separation from Kelli, O’Donnell reaffirms the importance of family in a talk with Vivienne Rose, saying, “Even though Mommy Kelli and I aren’t living in the same house anymore, we’re still a family. Family is forever. And family is love.”

Interspersed with these portraits are musical performances and animated interludes, including: reggae star Ziggy Marley, his mother Rita Marley and sister Cedella Marley performing “I Love You Too”; four-year-old Najorae and her father singing their original song “Love Is the Thing;” 11-year-old Martin and his seven brothers and sisters performing “CariÃ±o (My Love),” nine-year-old Joey singing “Raised on Love,” a song he wrote with his mom and dad; and folk musician Elizabeth Mitchell performing “Blue Clouds” with husband Daniel Littleton and seven-year-old daughter Storey.

O’Donnell’s tongue-in-cheek performance of “My Science Project” tells the animated story of a young girl whose class project describes the scientific way she came to be. And Frank Sinatra’s rendition of “Too Marvelous for Words” is accompanied by an animated sequence of a sperm in top hat serenading a glamorous egg.

The soundtrack of A Family Is a Family Is a Family also includes original songs written for the special, among them: “And Mom and Kid,” by They Might Be Giants, “My Family,” by Sweet Honey in the Rock and “A New Generation (Conner’s Theme),” by Charles Strouse. In addition to “Too Marvelous for Words,” classic recordings featured are “Baby Mine,” sung by Bonnie Raitt and Was (Not Was) and “A Bushel and a Peck,” performed by Doris Day.