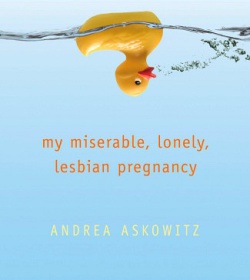 This book may have a rubber ducky on it and a baby born at the end of it, but beyond that, it has little to do with most parenting/pregnancy books, and the fact that Askowitz is single or a lesbian aren’t, ultimately, what sets it apart so much as her outlook. She’s supposed to be ecstatic; she split up with her long-term girlfriend and went through the rounds of picking out a sperm donor specifically so she could become the mom she’s longed to be.

But she’s not happy. At all. She misses her girlfriend fiercely, and is still dealing with the harrowing death of her lifelong friend. Both of these events, the breakup and the loss of her friend, form the backdrop to the growing life inside of her. Yet they don’t stop Askowitz from being scathingly hilarious, sparing no one, including her siblings, parents, extended family, friends, exes, coworkers and Lesbian Camping. When talking about how her ex-girlfriend Kate gained 40 pounds while they were together, Askowitz doesn’t hide her revulsion, and upon being asked “Would you want my body?” Askowitz replies “No, but it’s perfect on you.” Askowitz then wonders, “Why couldn’t I have said nothing, or changed the subject?” It might be tough to take if your its recipient, but as a reader, Askowitz has taken her best moments and turned them into something that readers can laugh at.

Sometimes it’s hard to wonder just how those in her life put up with Askowitz’s demands during her pregnancy, yet this is what makes powerful memoir: honesty. She doesn’t sugarcoat her grouchiness or the intensity of labor. And perhaps the most vital story here isn’t about Askowitz becoming a mother, but searching for acceptance from her family after feeling like the family freak after she came out as a teenager. The end is the tearjerker the rest of the book hasn’t quite prepared you for, yet she still ends on a note so befitting this book, it just has to be quoted: “Excuse me, Dana, that’s my tit.”

Askowtiz may have been miserable and lonely, but this book is full of humor, not the kind going for cheapeasy laughs, but a very strongly Jewish, feminist, often righteous, lesbian brand of humor Askowitz was clearly born with. It’s uncensored, full of dyke drama, told in sometimes brief diary snippets, with other asides into her childhood in Los Angeles. This memoir has roots, and will make you laugh as well as cry as it goes from childhood to death to birth and circles through the three.