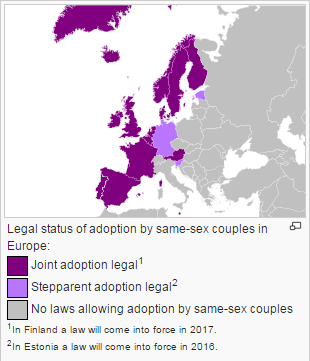 Portugal has become the latest State to allow same-sex couples to adopt children following a parliamentary vote last Friday. Previous attempts to introduce full adoption rights for same-sex couples had failed. When same-sex marriage was voted into law in 2010, the law explicitly excluded the right to adopt. And in 2013, the parliament approved a law allowing one same-sex partner to adopt their partner’s children, if they were married, but refused to allow same-sex adoption if both parents were childless. Following last week’s vote, one lawmaker, André Silva, said: “All children – including children in care – have a right to have a welcoming family, providing love, stability, security, commitment, and the opportunity to bond and enjoy interactions essential for their development.”