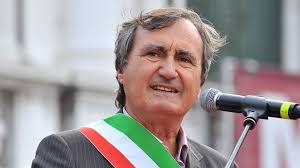 “Pride marches have just gone ahead in Uganda, Jamaica and Ukraine. So can you believe that the local mayor has tried to ban Pride in Venice, Italy? He described the march for love and equality as “farcical” and said it could never happen in Venice.

What’s worse is that this anti-gay Mayor has also banned books about lesbian and gay families from Venice’s schools. He’s trying to turn the clock back on equality and the only way to stop him is to show that he’s shaming his city internationally.

There is a protest against the anti-gay Mayor in Venice on Saturday. If we build a huge petition before then, it will boost media coverage of the protest and get the Mayor to back down. Demand he brings back the pro-equality books and apologises for trying to ban Pride: go.allout.org/en/a/venice-mayor

Mayor Luigi Brugnaro banned children’s books featuring lesbian and gay families from Venice’s schools just after being elected in July. One is the story of a baby penguin brought up by two male penguins. The story shows that gay families are loving families like any other.

Last week, Mayor Luigi Brugnaro, told the Italian newspaper La Repubblica: “There will be no gay pride in my Venice”. In a later media interview, he tried to backtrack, but with the books still banned, there’s no evidence that he has actually changed his anti-gay stance.

Right now, the Mayor of Venice is hoping to bask in the limelight of Venice’s international film festival – which is taking place until 12 September. But an outcry from thousands of All Out members will show him that his anti-gay policies are bringing shame, not prestige, to Venice.

All Out members have fought back against anti-gay politicians around the world… and won. From getting city officials in Buenos Aires to provide security and safety for the city’s Pride Parade, to taking to the streets in 30 cities to fight Russia’s anti-gay law – when we come together, we can win.

Sign the petition to get Venice’s Mayor to back down: go.allout.org/en/a/venice-mayor

Thanks for going All Out,

Andre, Rose, Leandro, Sarah and the All Out team.

P.S. Can you believe that as well as trying to ban a Pride march in Venice, the local mayor has also banned a book about gay penguins? He’s getting out of control. Let’s get him to back down by showing him he’s shaming Venice internationally: go.allout.org/en/a/venice-mayor”