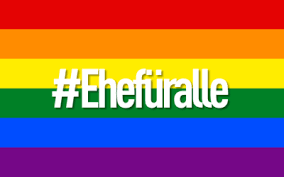 The Network of European LGBTIQ Families Associations, NELFA, is very delighted by the result of the recent “decision of conscience” in the German Bundestag. 393 members of parliament (out of 623) voted in favour of a law that establishes marriage equality within the right of joint adoption. So far, same-sex couples in Germany had only the possibility to enter into a registered partnership (since 2001). It is the outcome of a long-running struggle of LGBTIQ* activists: The demand for a so-called “Ehe für Alle” began 29 years ago. Earlier this week, Chancellor Angela Merkel gave a fresh impetus (probably as election campaign manoeuvre) by expressing her view that marriage equality should be a choice in conscience.

NELFA’s President Dominique Boren, says, “We shall all be proud and energised to carry on our legitimate fights and stand ups against all kind of discriminatory attitudes and laws towards our LGBTIQ* families and their children. Let us pave the way to abolish barriers and borders between rainbow families within Europe; and call the remaining countries without same-sex marriage to immediately take action to vote for such legislation!”

NELFA’s Board member Caroline Ausserer, who lives in Germany, adds, “The decision yesterday morning – it’s unbelievable, and it was made really quick, within one week. After having postponed the issue about 30 times before. Although we are very happy at the moment, our battle for more equality goes on. Now, for example, we need to advance the automatic co-parent recognition and also trans rights in Germany!”

Marriage equality in Germany: NELFA is full of joy after the decision in the German Bundestag