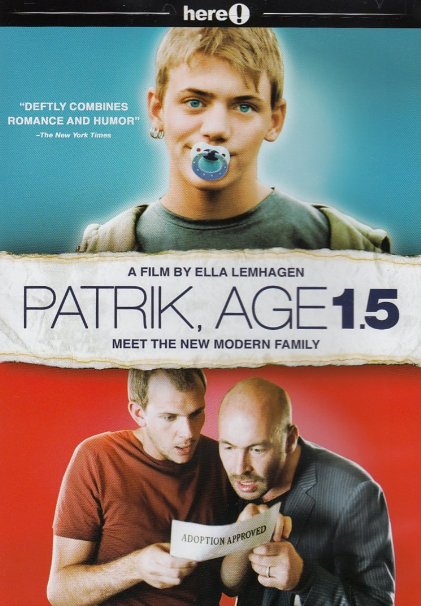 Een komische film over een Zweeds homostel dat een zoon adopteert
The film chronicles the experience of a gay Swedish couple, Sven (Torkel Petersson) and Göran Skoogh (Gustaf Skarsgård) as they move into a new suburban neighborhood and adopt a child, beginning with their welcoming party. After meeting their new neighbors and settling into their jobs, they decide to adopt a child. Although they are married, no country is willing to let a gay couple adopt any of its children. After initially being turned down by the adoption agency, a Swedish orphan becomes available, whom they readily agree to adopt. However, a typographical error on the papers changed the child’s age from “15” to “1.5”. When their new son Patrik (Tom Ljungman) arrives, they are shocked to find him a troubled teenager with a criminal background.

Hurrying to the adoption agency to rectify the error, they arrive to find there is nothing that can be done until the next week. Over the next few days, Sven is appalled by Patrik’s insulting behavior, even though Göran sees the good in him. Patrik is initially fearful of both men, believing stereotypes that gays are pedophiles. Once the agency reopens, all three are told by the officials that Patrik’s only options are living with them or returning to the foster center where he came from. After living up to his troublemaking habits, Patrik causes Sven to leave in disgust over Göran’s unwillingness to kick Patrik out. Göran agrees to look after Patrik until the agency can find a suitable home for him. Over the next few days, Patrik reveals his talent for gardening, and Göran grows to accept him.

After several weeks, the agency notifies Göran that a family has been found for Patrik, who by this time has gotten past his initial fear and contempt for his surrogate parents. Sven returns as he and Göran both realize their issues were not worth ending their relationship. Patrik’s new father arrives to pick him up, and he leaves with him. After a short time, Patrik returns, and the three then live together permanently.