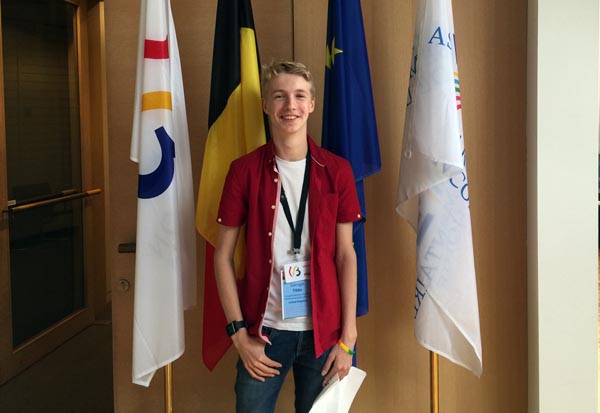 The Network of European LGBTIQ* Families Associations (NELFA) was represented at the Eurochild Conference 2016 by Darragh Tibbs (aged 16) from Northern Ireland. This year’s theme was “Children’s Rights Matter”. Darragh was active throughout the event, bringing the voice of children raised by LGBTIQ parents to the conference. Eurochild 2016 took place 5–7 July in Brussels, Belgium.

NELFA President Maria von Känel said, “NELFA is very grateful to Darragh and his two mums for representing us at Eurochild 2016. This biannual conference brings together youth and children’s welfare authorities from all over Europe. Darragh proved to be a wonderful ambassador for rainbow families but in particular for all our children, bringing their voice into all the debates and workshops.”

Luís Amorim, Vice-President of NELFA, added, “When NELFA calls for equality for all rainbow families across Europe, it is to ensure that our children are given the full legal and social protection that they deserve. Darragh’s presence at Eurochild 2016 served to remind European authorities that their commitment should extend to all children, including those with LGBTIQ parents, because their rights matter.”

Darragh Tibbs made an eloquent appeal at Eurochild 2016 by stating, “Given that marriage affords the couple various benefits for starting and having a family, refusing it to my parents is breaching my rights as a child. The protections, responsibilities, rights, obligations and benefits that a straight couple get for their family can make a great difference to their lives; in Northern Ireland gay couples can’t have that in the same way. Say we accepted that the majority party in Northern Ireland, the DUP, will always have some indecipherable objection to gay people; it’s still not an excuse for refusing a child their rights. They have agreed to protect me and my brother and every other child in Northern Ireland in accordance with the 42 articles of the UN Convention on the Rights of the Child. If my family isn’t protected, then neither are my rights.”
Read Darragh’s full speech (pdf).